Ten years on, we still don't have a Bruce Lee museum in Hong Kong. Do we have to wait for another decade?

Recently I wrote a story for Quartz (Tourists keep looking for Bruce Lee in the one place that can't seem to remember him) about the difficulties in finding traces of Bruce Lee in Hong Kong, the city where the late star grew up and he became a kung fu legend and screen icon with the movies he made with studio Golden Harvest. This is particularly true when the exhibition Bruce Lee: Kung Fu ‧ Art ‧ Life currently on show at the Hong Kong Heritage Museum will end its 5-year run in July in 2018. Since we don't have a museum dedicated to Lee, if the show did not extend its run, fans will lose a precious spot where they can pay tribute to their beloved idol. It'd be a shame for Hong Kong not to have a destination commemorating Lee.

During my research for the story, I reconnected with Wong Yiu-keung, chairman of Bruce Lee Club, the Hong Kong-based fan club. Mr Wong said perhaps now would be the time to re-boot the conversation about building a Bruce Lee museum in Hong Kong. 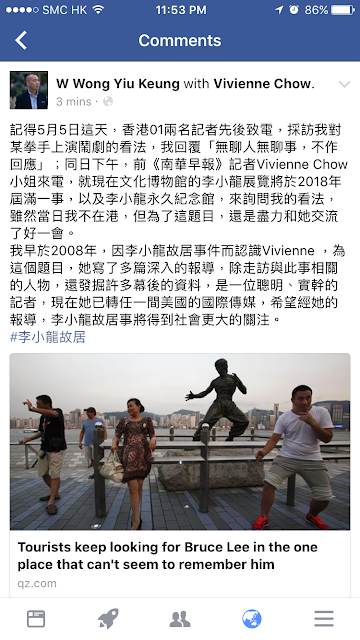 Mr Wong shared my story in Quartz on his Facebook, in a post reminding me that we have in fact known each other since 2008 when the proposal for a Hong Kong Bruce Lee museum was first tabled.

I was in shock when I read Mr Wong's Facebook post to be honest. I was following the whole saga through out a long period of my career at the South China Morning Post, but I didn't realise that 10 years have already passed - and today we still do not have a Bruce Lee museum in Hong Kong.

This is one of the stories I wrote back in 2008 - Fans kick into action to plan museum at Bruce Lee's home - when Yu Panglin, the late owner of Lee's former residence at 41 Cumberland Road in Kowloon Tong, listened to fans' plead and decided to donate the mansion and turn it around into a Bruce Lee museum.

Over the past decade I wrote a series of stories related to the development of the museum proposal. I spoke to Mr Yu, Lee's brother Robert Lee and sister Phoebe, daughter Shannon Lee, government officials, and even Lee's former lover and actress Betty Ting Pei. Here are some of the highlights:

Bruce Lee's Kowloon Tong house to be turned into museum (2008)

Lover still so glad Bruce Lee came into her life: an interview with Betty Ting Pei (2008)

Over the years, I couldn't quite understand why Hong Kong does not have a museum its most famous son - Bruce Lee was the one who put Hong Kong on the world map, even today, despite he died so many years ago (I still have foreigners asking me if I knew kung fu XD).


//Michael Tien Puk-sun, a consultant for the Bruce Lee Club who has been in contact with the government on the issue, said he received a reply from Secretary for Commerce and Economic Development Frederick Ma Si-hang declining the use of government money to buy the property, which is now a love hotel. 'The answer [from Mr Ma] was that the tourism angle was not a strong enough reason to use public money,' he said.// -- 2008

But perhaps it's a little more complicated than I imagined - after I wrote this story in 2013: Bruce Lee's legacy leaves a family divided. In this story, I wrote extensively about the family feud of the Bruce Lee family.

I'm not going to repeat the sad story here. Just click on the link above and have a look. It is sad not only because of the family division, but how it hurts fans from all over the world. For a legend like Bruce Lee, the right to his story and legacy do not belong to just one or two people, but everyone in the world who respects and honours him.

It seems this Bruce Lee story never ends. I only hope that we don't have to wait for another 10 years for a Bruce Lee museum in Hong Kong.