Throughout my career as a journalist and critic, I give public talks on a regular basis and here are some of the highlights. Compared to writing, public speaking adds a different dimension to communication and the live interaction with audiences is priceless. 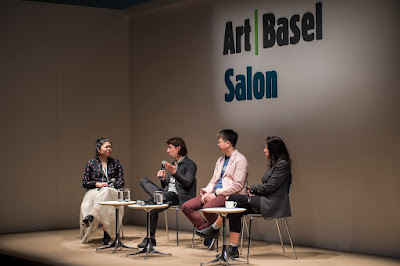 It's been my honour and pleasure to take part in Art Basel's Salon programme as a host and moderator. While Art Basel is no doubt a platform for the sales of artworks, it makes use of its role as a catalyst and influence as the world's biggest art fair, offering artists, curators, critics and stakeholders to address important topics that go beyond the market transactions.

In 2016, I presented a talk exploring the issues about art criticism and cultural journalism in Hong Kong at Art Basel 2016. A playback can be watched here: Where Are the Art Critics? Cultural Journalism in Today's Media Landscape.

Does political art matter | A Discussion

This panel broadly considers arts relationship with politics, in terms of how artists and curators formally respond to the world around them, and the situations that arise. Do artists have an inherent responsibility to participate in political dialogue, and how much of a role does art really play in shaping such dialogues? When has art been most effective in affecting change, and what examples come to mind?

In June, 2017, I was invited to speak at the GAAB Collectors Summit in Warsaw, Poland. GAAB - Grand Asian Art Bazaar - is a brand new event art fair dedicated to Asian contemporary art to be staged in 2018, with the support from Warsaw Institute for Modern and Contemporary Asian Art Foundation. In its inaugural edition, prominent art collectors, art critics and experts of the art market shared their experiences and views on the art market and art collecting. The event concluded with great success and I'm really looking forward to the next edition.

Re:publica, Berlin, Germany
In May 2016, I gave a talk at Re:publica in Berlin. It is one of Europe's largest conferences on the Internet society.