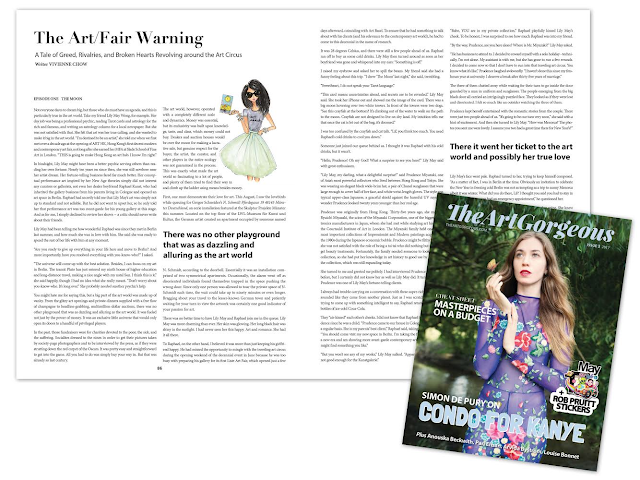 The Fair Warning is my first attempt to write fiction.

I have always wanted to create my own stories and try to do something creative. Having been writing about the real world for nearly two decades as a journalist and as a critic, now is the time to write creatively while drawing inspirations from my real life experiences and observations.

According to Sotheby's art auction glossary page, "fair warning" means "a warning sometimes given by the auctioneer that the hammer is about to come down on a lot. The fair warning offers one last chance to increase the bidding. If there are no subsequent bids, the auctioneer's hammer falls and the sale is completed." This description sits quite well with the nature of the story, which is a "tale of greed, rivalry and broken hearts revolving around the art circus".

But I was suggested to add "art" somewhere so that it gives people a better idea of the setting of the story. And the first episode was published under the title of The Art/Fair Warning in The Art Gorgeous magazine issue #3, which can be downloaded here.

The Fair Warning aims to be a fun, entertaining read while bringing the general audience a glimpse of the art world, a fictional narrative that is set in the real world. It's literally Gossip Girl meets Seven Days in the Art World. And while the story aims to please, I also hope the story can be a critique of some sort.

This is a work in progress. New episodes will be released on a regular basis.

Or read it online here:

EPISODE ONE: THE MOON