Is Hong Kong ready for a TV revolution? 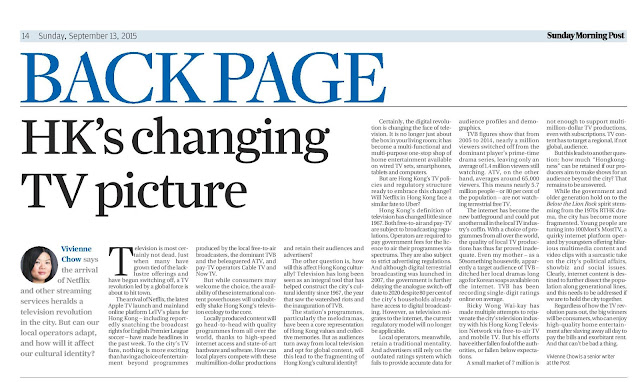 Television is most certainly not dead. Just when many people in Hong Kong - including my mother, a 50-something-year-old housewife -- have been dreading over the city’s lacklustre offerings on the small screen and switching off, a TV revolution led by a global force is about to hit the town.

The arrival of Netflix, the latest Apple TV launch and mainland online platform LeTV’s Hong Kong plans have made news headlines recently. To the city’s TV fans - or more precisely today, consumers of moving image content -- nothing is more exciting than have more choices of home entertainment that go beyond programmes produced by local players free-to-air broadcasters, the dominant TVB and the beleaguered ATV, available only on a rigid linear schedule, and pay-TV operators Cable TV and Now TV offering programmes looping around the clock.

But while consumers are ecstatic about the abundant choices of content in future, the arrival of these international digital content powerhouses will undoubtedly shake Hong Kong’s television ecology to the core.

Locally produced television content is forced to go head-to-head against programmes from all over the world, where many of them are of high production value, thanks to the easy access through high speed internet and state-of-art hardware and softwares. How can local players compete with these multi-million dollar productions and retain their audiences and advertisers?

The other question is, how will this affect Hong Kong culturally? Television has long been regarded as an integral tool that constructs the city’s cultural identity after the 1967 riots. Citizens were exposed only to limited choices of locally produced television programmes because of the restriction of technology and their analogue lifestyle in the past. Since the inauguration of TVB in 1967, its programmes, particularly the melodramas, had been a core representation of Hong Kong values and collective memories. But as more and more audiences are walking away from local television content and opt for global content according to their personalised taste, will this be the beginning of the fragmentation of Hong Kong’s cultural identity?

The past month could’ve been like Boxing Day for Hong Kong’s TV audiences: the delightful ride began with Netflix, the American internet streaming entertainment platform offering a library of movies and TV shows including award-winning content such as political drama House of Cards, confirming its long awaited launch in Hong Kong early next year, alongside other Asian territories including South Korea, Singapore and Taiwan.

China’s largest online video company LeTV, which offers TV content streaming services in mainland and Hong Kong, snatched the broadcast rights of English Premier League football games in the city from next season onwards for Hong Kong at a reported deal worth US$400 million, beating PCCW. LeTV also produces its own TV dramas available to Hong Kong and mainland viewers via its digital platform. Now LeTV is teaming up with Hong Kong Broadband for high speed internet traffic, though it remains a mystery on its "collaboration" with Now TV on showing English Premier League.

This was followed by the highly anticipated Apple launch, where the latest version of Apple TV branded as “the future of television” was introduced. Viewers can personalise their choices of TV programmes through apps such as YouTube, Netflix, or movies carried on iTunes, and watch shows whenever they want. The device also allows viewers to play games, shuffle your music and videos by installing the right apps accordingly on you TV screens.

The world of television is heading towards new era thanks to the digital revolution. Television is no longer television. It has become a multi-functional and multi-purpose one-stop shop of home entertainment available on wired television sets, smartphones, tablets and computers. It becomes a much more personalised entertainment experience which can be enjoyed anytime, anywhere. Audiences are opening their arms to embrace the pleasure brought by this unprecedented change.

But when even the honorable legislator Christopher Chung Shu-kun could confuse streaming with downloading at a Legislative Council debate on the review of Copyright Ordinance last year, are Hong Kong’s TV policies and regulatory structure ready to embrace this change? Will Netflix in Hong Kong face the same fate as Uber did recently and be prosecuted for whatever reasons?

Hong Kong’s definition of television remains more or less the same as the way it was when TVB was inaugurated in 1967. Television, free-to-air and pay-TV, is subject to broadcasting regulations. Licensees are required to pay government fees for the licence to air their programmes via spectrums. They are also subject to strict advertising regulations that limit the exposure of commercials to audiences. And although digital terrestrial broadcasting was launched in 2007, the government is further delaying the analogue switch-off date to 2020 despite 80 per cent of the city’s households already have access to digital broadcasting.

The traditional mentality of television remains among players. Despite TVB has been actively cultivating its online presence through its MyTV platform, terrestrial broadcasting, analogue and digital, remain the core business. Perspective player Forever Top, a consortium led by property tycoon David Chiu Tat-cheong and MGM China co-chairman Pansy Ho Chiu-king, is bidding a free TV licence. The ailing ATV has found a consortium of mainland investors to inject HK$5.1 billion and to apply for a new free TV licence.

Advertisers today still rely on the much criticised ratings system which fails to provide accurate data of viewerships profiles and demographics as their guideline to place ads.

Traditional TV’s programming makes almost no difference from those shot in the 1980s. Mid-night replays of drama classics from decades ago, such as recent “hits” like stock market drama The Greed Man (1992) starring Adam Cheng and comedy Justice of Life (1989) starring Stephen Chow were landed on front pages of entertainment press and widely discussed on social media.

But as television is migrating to the internet, the regulatory model will soon be no longer applicable.

People are walking out of Hong Kong’s television. TVB’s figures show that within one decade from 2005 to 2014, nearly a million viewers switched off from the dominant players’ prime-time drama series, leaving only an average of 1.4 million viewers still watching the shows. ATV, on the other hand, has an average of 64,660 viewers. This means nearly 5.7 million people - or 80 per cent of Hong Kong’s population -- are not watching terrestrial free TV.

But will one day these existing stakeholders gang up to stop the evolution of television in the digital era, just like what the taxi industry did to Uber?

The internet becomes the next battleground for local television, but this could further kill the local TV industry. When people are given the choice of programmes from all over the world, the quality of local TV productions has proved to be inadequate when facing a global competition. Even my mother - apparently a target audience of TVB - ditched the dominant broadcaster’s dramas long ago for Korean soap available on the internet.

TVB has been recording an average of single digit ratings online despite its efforts. Ricky Wong Wai-kay has made multiple attempts to revolutionise television in the city with his Hong Kong Television Network (HKTV) via free-to-air TV and mobile TV. But he was banished from entering the market one time after another. He then make HKTV an internet TV platform, but as he puts his shows produced at HK$1 million per episode online. But the results fell below expectations after a couple of hits.

A small market of 7 million population is not enough to support multi-million TV productions, despite subscriptions. TV content has to target at a regional, if not global, audience, just like Hollywood films to serve an international market.

But this leads to another question -- how much “Hongkongness” can be retained if Hong Kong’s television producers are aiming at producing shows catering an audience beyond the city? That’s a question remains to be answered.

While the government and the older generation are still holding on to the “Below the Lion Rock spirit” stemmed from the 1970s RTHK drama today, the city has become more fragmented than before. Young people are tuning to 100 Most’s MostTV, a quirky internet platform operated by youngsters offering hilarious multimedia content and video clips offering a sarcastic take of the city’s political affairs, showbiz and social issues (Yes, I am a fan). Moving image content available on the internet is destined to further dissect the city’s population. A wider gap among different generations is expected and this needs to addressed in order to hold the city together.

Regardless of how this television revolution will pan out, consumers are the ultimate winner. After all, we just want to treat ourselves with some high quality home entertainment after slaving ourselves all day only to pay the bills and the exorbitant rent.