The destiny of ATV is already written in the stars? 從占星角度看亞視 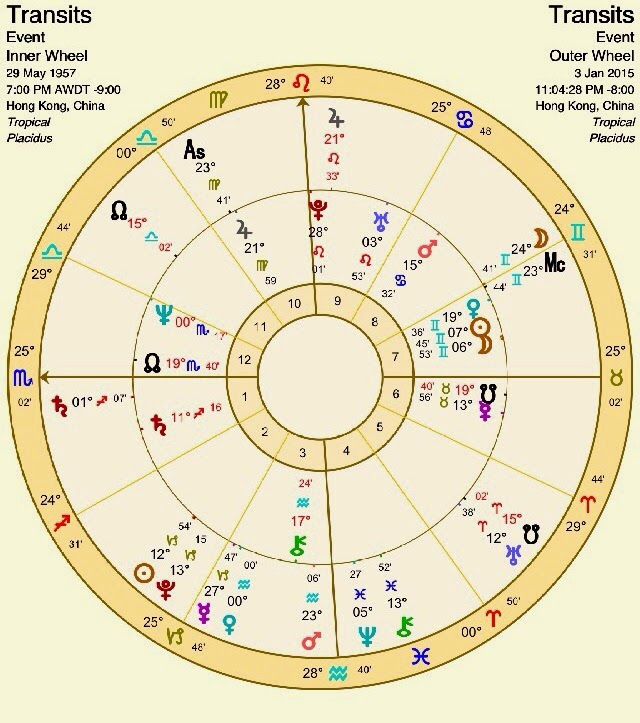 Ancient people believed that our fate has already been written in the stars the moment we were born. And hence, over the course of human civilisation, various types of star-reading methods have been developed. Whether it is astrology in the West or Zi Wei Dou Shu 紫微斗數 in Chinese traditions, humans, generations after generations, strived to unlock the secrets of their destiny through decoding the positions and movement of stars.

When astrology is tied in with the beleaguered Hong Kong free-to-air television station Asia Television (ATV), it became a great topic of discussion over a delicious hot pot dinner with my good old friend E.

E, I would address her as Master E, is an astrology enthusiast. But her knowledge and sharp interpretations of the positions of stars make her more than just an amateur. It is my honest hope that Master E will go on to develop a second career as an astrologer, for she is truly talented.

So our conversation went from gossip over to the fate of ATV, a topic (yes a topic) that I constantly write about in my job as a newspaper journalist covering cultural affairs, as we dip the beef slices into the boiling soup.

The recent ATV reality drama evolving around shareholders disputes, court rivalries and Labour Department's prosecution of unpaid staff salaries (first happened in September, and now the station hasn't paid staff half of November and December salaries) have been making news headlines. Although ATV's executive director Ip Ka-po insists that ATV will live, and is confident that a white knight will turn up at last to rescue the station from debts and demise, few believe that ATV can survive. The Communications Authority has refused to recommend a renewal of ATV's free-to-air licence, which is due to expire in November. The Chief Executive in Council is supposed to give a TV station 12-month notice if it decides to terminate a TV station's licence. This means CE in Council has already delayed its decision by over a month. There are suggestions of the government trying to buy time for ATV to either look for a new investor to solve the problem, or leave ATV to die so that Chief Executive Leung Chun-ying don't have to take any responsibilities over the fate of ATV.

Whether this is true or not, the reality is that ATV is on the edge of collapse. And what do the stars say about that?

While we were waiting for the meat balls to get ready in the boiling soup, I asked Master E if we could create a natal chart for ATV. And apparently we could.

The picture on top is the natal chart for ATV, taking the time and date of broadcasting commencement of ATV - formerly known as Redifussion TV before rounds and rounds of ownership reshuffle -- as its birth time and date.

When the chart was generated with a smartphone app, we burst out laughing (sorry it was quite mean over a TV station striving to survive) with amazement, because, at first glance, ATV is destined to suffer.

Here are a few key indicators:

The very first thing that Master E spotted is the position of Pluto, at 28' 01" degrees Leo, which almost conjuncts ATV's Midheaven (at 28 degrees Leo). With such a position of Pluto, said Master E, ATV is destined to live a hard life. According to Cafe Astrology, the Midheaven, locating on top of the chart, indicates one's "achievements in the eyes of society, public face, accomplishments and over all sense of responsibility and standing in the society".

But when Pluto, a planet indicating renewal, rebirth and destructions, conjuncts Midheaven, it's not a good omen. Astrologer Robert Pelletier has said that such position indicates inevitable changes through out one's life, with over possessive parents attempting in dominating one's development. "At some point in your life, all the negative consequences of your actions will be exposed, thus tearing down whatever good you have done. Nixon is an example of this type of person."

In reality, ATV has experienced endless ownership changes, from Rediffusion to entrepreneur Deacon Chiu in the 1980s, then Lim Por-yen in the 1990s, followed by mainland businessman Feng Xiaopeng, and then ... the Cha brothers, Liu Changle, Taiwanese snack tycoon Tsai Eng-meng and now Wong Ching. These owners, who can be considered as parents, imposed tight control over ATV's development, from business strategies to programming. "But they never resolve the roots of the problems, and every new owner only inherited the liability from the past," said Master E.

The other thing to look at is the transit Pluto, currently at 13' 15" Capricon, Second House, which is sometimes called the House of Possessions, which often deals with money. When Pluto sweeps across ATV's Second House, as we all know by now, ATV is in deep deep financial woes. Master E said the effect of Pluto in Second House will also impact the opposite Eighth House, which stands for death, transformation and debts (!). With Mars, a planet indicating the "active energy", located at 15' 32" degrees Cancer, Eighth House, Pluto is forming a direct opposition against Mars. Under such influence, ATV is destined to suffer financially. And since Pluto moves very slowly, ATV is not likely to get out of its financial troubles any time soon.

Tension will be escalated when Pluto forms an exact square with Uranus, a planet representing progression and freedom, during March 11 to 28, said Master E. Various astrological sources have highlighted the influence of Pluto-square-Uranus, as the two planets form seven exact squares (angled at 90 degrees against each other) from 2012 to 2015. Such position brings about sweeping changes, revolution and clashes. It is not a comfortable time, as we know that over the past few years, there have been various clashes, political movement and even revolution (take the Umbrella Movement last year, for example).

Master E estimated that March will be a critical time for ATV. Last month, the court ruled in favour of Tsai and appointed accounting firm Deloitte to become managers of ATV, taking up the responsibility to find a new investor to acquire the 10.75 per cent stake from Wong (well, Wong's relative Wong Ben-koon controls 51 per cent stake of ATV) to break his dominance and find a new CEO. Deloitte has said that it will probably take two months to find a new investor. So if everything goes smoothly, Deloitte should be able to find a "white knight" by the end of February. But if things do not go forward as planned, it is logical to expect something bad will happen to ATV in March. But of course, we shall see.

The last key point is the position of Saturn. A planet signifies restriction and limitation, Master E has told me that whenever Saturn passes, expect crisis and chaotic changes that will drain you. It will require you to face your problems and deal with them, albeit in an often destructive manner.

This, I have to say, is quite true, as Saturn toured my Sixth House over the past two and a half years. The Sixth House concerned about health and the daily work we do. It is often recommended to have a body check when Saturn tours the Sixth House. For me, I found out that my BMI has entered the obesity zone, and that sent me a wake up call to lose weight before it was too late. Thus I worked on my diet and exercised a great deal, and now, six months down the road, I have lost a total of 10 kg. I wasn't paying attention to my astrology chart at the time, but now, I must admit that astrology is quite fascinating.

Back to the case of ATV. Transit Saturn has entered the First House of ATV, now at 01' 07" degrees. The First House, which can be interpreted as the House of Self, relating to one's identity. Now with Saturn touring ATV's First House, it is inevitable for ATV to experience what could be a frightening identity crisis, Master E said. Saturn will remain in one house for approximately two and a half years, meaning that this identity crisis for ATV is only at its beginning.

The other major problem for ATV, as indicated by Saturn, is the "Return of Saturn", meaning the transit Saturn will conjunct ATV's natal Saturn.

Here, in ATV's natal chart, the station's natal Saturn is at 11'16" degrees, Sagittarius, First House. Return of Saturn is a very major, and often painful, astrological phenomenon. When the Return of Saturn takes place, one is likely to experience disruptive changes -- divorce, life crisis, termination of employment, hazards, etc. On the down side, it is painful, but on a positive note, it rids of things that should not remain in your life, and you move on afterwards only for the better.

It takes roughly 29 years for Saturn to return to its natal position. Master E said Saturn will return to ATV's natal Saturn approximately the beginning of 2016.

At this point, we fell into shock as we were enjoying the delicate beef melting in our mouths. If the next Return of Saturn is going to commence at the beginning of 2016, this means, the last Return of Saturn took place 29 years ago - 1987.

In 1987, when it was still owned by Deacon Chiu, a four-alarm fire broke out in ATV's previous headquarters in Broadcast Drive, Kowloon. The eight-hour blaze burnt down the building, studios and filming equipment, causing a broadcast blackout. It was reported that Sir Run Run Shaw, who owned TVB at the time, offered a helping hand to ATV by allowing its rival into its headquarters (TVB was ATV's neighbour in Broadcast Drive back in the days), so that it could maintain its operation. The news team had to operate on their vehicles parked in the streets. A year after the fire, Chiu sold his shares and Lim Por-yen took over.

Will similar hazards happen to ATV again during its next Return of Saturn? Of course we still don't know at this stage, but Master E said it will certainly not be comfortable for ATV.

What intended to be a fun look at ATV through astrology turned out to be a shocker. Neither Master E nor myself had any intention of spreading salt on ATV's wounds, or to promote any form of superstition. We were only curious of what the stars might have laid out in the destiny of ATV - just another perspective to look at what is going on with this TV station that was once a trendsetter and a cradle of Hong Kong's creativity.

The stars might have indicated a path, but the future is in our hands. All I can say is, ATV, good luck.