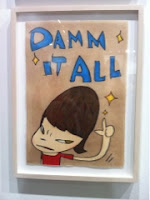 The English title for Xiqu Centre - the first performing arts venue to open in West Kowloon Cultural District in 2016 -- has been centre for debate in the past couple of weeks. Some Hong Kong people are not happy with the name Xiqu, arguing why a venue in Hong Kong has to use the Mandarin pinyin for 戲曲 instead of a proper (albeit clumsy) English name such as Centre for Chinese Opera and Traditional Theatrical Arts.

This also happened to be one of the topics of last night's dinner party. I tabled my view, suggesting that perhaps since Xiqu has been the term used for years in the field of Chinese performing arts studies around the world, and even the Arts Development Council adopts this name in one of the art forms it looks after, it wasn't necessary to use a different name. I am no expert in traditional Chinese performing arts, but I understand that this art form has a lot more beyond Cantonese opera, rooted from a great variety of regional cultural traditions and performed in countless number of dialects, a standardised name Xiqu might not be a bad idea after all. And as for tourists who do not speak Chinese of any sorts, they can always Google the name if they are ever curious of what it is all about, just like I would Google what it's all meant by Petite Palais in Paris.

"It sounds reasonable, but the point is, at times like these, we are not convinced. And we are certainly not happy about it," said one.

What the friend meant was that when the society of Hong Kong has been driven to the verge of collapse given tens of thousands of mainland shoppers snapping up all our daily necessities ranging from flats to milk powder and even Ferrero Rocher chocolates, the Hong Kong people's hatred towards mainland has reached a critical point. No one wants to be associated with anything mainland - from language (Mandarin and simplified Chinese) to politics (rumours about how the liaison office secretly running Hong Kong, how CY Leung kowtowing to Beijing to secure his CE job, etc). Xiqu in this case, of course, becomes a natural victim.

Like I said, I really didn't mind Xiqu. Just like the article in Inmedia, what should be even more crucial in the discussion of Xiqu Centre is whether the design actually meets professionals' needs, and the software - programming, management, and whether Hong Kong and the region has enough top quality programmes to offer through out the year. On top of that, where does the audience come from? How to widen the audience base so that the centre will not have to depend fully on taxpayers' money to survive?

And just when Hong Kong was busy with debating how this name could mean Centre for Private Parts [xiqu in Cantonese resembles the sound of private parts], I was in Singapore investigating what this little country has to offer in the field of arts and culture. And I must say, if Hong Kong continues to waste its time on frivolous discussions ignoring the essence of the issue, Hong Kong will LOSE [xiqu also resembles the sound of lose in Mandarin] for sure.

I hate to compare Hong Kong and Singapore, but comparison is inevitable. I wouldn't say everything's nice and perfect in Singapore, but despite this top-down model, Singapore is striving to improve its development in arts and culture in order to cultivate an industry thriving on culture and creativity.

The country has done everything right on paper: promoting Art Stage Singapore, a new art fair focusing on Southeast Asia founded by the man who headed Art Basel for a decade and expanded its empire to Miami; strengthening its museums such as the Singapore Art Museum and the National Art Gallery to be opened in 2015; drawing resources from the National Arts Council, the Tourism Board, and the Economic Development Board to promote culture and develop the Gillman Barracks, a heritage site turned art gallery cluster and contemporary art centre. Plus the aggressiveness of art institutions - all together might be of a smaller scale compared to the ambitious West Kowloon arts hub, but they are all interlinked and its government appears to have thought things through.

Whether these top-down initiatives will deliver are yet to be seen - these hardwares will need quality software -- people and ideas -- in order to shine. Culture should be organic instead of being an order from the top. Despite that, holistic cultural policy is necessary, but in Hong Kong, on the other hand, It is all over the place.

Singapore's efficiency largely has to do its the lack of democracy - so that things could move forward without obstacles from the opposing forces, which I seriously do not support. Press freedom and freedom of speech are the cornerstone for Hong Kong's success and we can't afford to throw them away. But when "free" discussions are skewed towards the hatred towards mainland because of the poor governance of both Hong Kong and China, we are doomed, as these discussions will not be based on reasons but rather on emotions.

If public discussion of cultural development could go back to the right track, Hong Kong might still have a chance. But unfair politics and the social unjust have already drained the energy of the city. Perhaps something major will soon happen so that this city can be rebuilt and reboot.