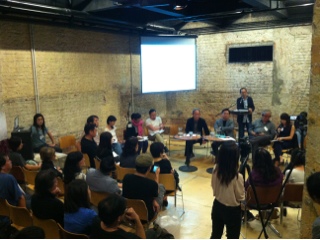 Artists, writers, thinkers and philosophers are meant to be battling at the frontiers of a society. They raise the right questions and liberate our minds with their innovative ideas to drive our society forward. Their experience and action should serve as an important indicator of what's really going on in a society.

If this is the case, then what happened the other night at the Fringe Club theatre is the manifestation of people's anger and distrust in the current system, and the public's insecurities about their own well-being and identity in the post-colonial Hong Kong.

That night at Fringe Club was the public forum on Hong Kong's representation at next year's Venice Biennale. It was supposed to be a "dialogue", an "exchange", but the conversation didn't go anywhere. There was no useful conclusion, no better understanding of different parties' perspectives. There were no new ideas being discussed. And worst of all, questions were turned into insults and endless humiliation. The crowd was pointing fingers at the management of Arts Development Council and M+. The scene was almost as horrid and bloody as that Bible story about a woman almost being stoned to death.

I'm not taking anyone's side. I'm neither an artist nor a curator (the forum was organised by a group of artists and curators). I don't work for any of those organisations either. I'm just an observer trying to figure out the logic behind this ordeal.

A quick recap: the ADC scrapped its usual practice for Hong Kong's representation at Venice Biennale 2013 from an open recruitment of proposals. Instead, it appointed M+ to helm the project.

The ADC said the issue was tabled for discussion at two council meetings, and the attending council members agreed on the decision unanimously. But some council members said they did not realise this was discussed, and found out only when a press release announcing the partnership with M+ and the choice of local artist Lee Kit to represent Hong Kong at the art Olympics was issued.

Then the debate began: some artists and curators accused the ADC for its lack of consultation on its decision to partner with M+. It also went on accusing M+ for not consulting anyone on its choice of Lee and dominating the development of Hong Kong's contemporary art scene.

After the back and forth "communication", the ADC's chairman Wilfred Wong, executive director Chow Yung-ping and M+ executive director Lars Nittve agreed to turn up for the "round table discussion" taking questions from the arts community. But, as we all know, it went sour in the end.

So what went wrong?

Wong explained that there had been suggestions to improve the selection procedure. Publicly recruiting curatorial proposals is one way, partnership with a cultural institution is another. And the ADC this time opted the latter. There was nothing wrong about trying to improve the selection procedure, but how was such decision to partner with one cultural institution reached? Why partnering with M+ but not the Museum of Art (though the answer is quite obvious)? Was there enough consultation within the council? And what about the visual arts group advisors? Were they informed or consulted?

If such topic was thoroughly discussed twice at council meetings like Wong said at the forum, then one should ask: who were the members attending those two council meetings? And more importantly, how many of these attending council members were elected?

Since we can't trace official records as the ADC does not publish minutes of closed door discussions, I can only trace back based on ADC's previous answers.

In response to my query back in June when I was working on the story for the South China Morning Post, ADC said that the two meetings were held in January and March. So I believe ADC was referring to the 7th and the 8th council meetings (links to minutes above but only available in Chinese).

According to ADC's website, the council "comprises 27 members appointed by the Chief Executive of Hong Kong. Of these, 10 are elected by various arts constituencies".

ADC certainly can't deny their responsibility for not doing a good enough job to ensure the transparency of its decision making process; but at the same time, council members must ask themselves if they have fully taken up the responsibility of monitoring the governance of ADC.

But even if the attendance was 100%, there was no way for the elected members to move a motion or jointly take any action, because there were only 10 of them. And the rest - 17 of them - were appointed by the government. If those 17 members gang up on a particular issue, they will win regardless.

So here's the thrust of the issue: ADC is not a funding body that is fully endorsed by the arts community or the culture sector. Their power comes from the government that appoints most of its members. And the arts community is asking such a body to be accountable to them? The structure of ADC is a system inherited from the colonial times - by appointing society's local elites into government bodies, these elites were hoped to assist the colonial government in dealing with local issues, forming a class of "collaborative Chinese elites".

I have yet to revisit the kind of public reaction towards such system during the colonial times. But I would imagine that after the handover, when Hongkongers are supposed to govern Hong Kong, such system is apparently outdated. And as the public are becoming better informed and more well-educated, attack and distrust of such system is destined to happen. No one in Hong Kong trusts this system any more, considering how the well-being of Hongkongers have been gradually perished by these elites during the post-colonial era, and how those north of the border are interfering more and more of the local affairs. Whatever decisions are made, people can only think that these elite decision-makers merely take advantage of the public and taxpayers' money. By connecting this incident with other social movements happened over the past 15 years, it is not hard to see that Hongkongers, regardless of which sector they belong to, are increasingly insecure about themselves - their benefits, their future, and more importantly, their identity.

Such anti-colonial sentiments were unfortunately extended to M+. Nittve said at the forum that one should not confuse the longing for political democracy with that for artistic democracy. He might be right, but unfortunately this is hard to ignore in Hong Kong. Nittve and a number of members from his team are seen by many as "imported elites". Regardless of the criticisms that many hold against them, they indeed have great international network. The international contemporary art world knows about M+ and West Kowloon before they even physically exist thanks to them, not because Hong Kong has this famous reclamation site that has been sitting there forever. The Museum of Art has been around for 50 years but no one in the contemporary art world seemed to know about it, until they have taken part in curating the Hong Kong pavilion at the Liverpool Biennale recently.

But it appears that the lack of trust is beyond, and this is no one's fault. It's about all these insecurities deeply rooted in the psyche of Hongkongers. For a long time, Hong Kong Chinese have been seeing themselves as being exploited - first by the former coloniser, and now by you-know-who. Resources have been skewed towards the elite group, and the majority of the public did not get to enjoy the economic benefits. Hong Kong artists have long been ignored by the system. It is unfortunate and yet understandable that they are in fear of how decisions are once again being dictated by so-called outsiders, and resources are once again being channelled to others.

In fact, Hong Kong should take advantage of Nittve's network and experience to expand and get more exposure internationally. If Hong Kong is spending HK$10m on this, we might as well make the most of it. The question is, can Hong Kong capitalise on Nittve's edge? Can Hong Kong ground Nittve's knowledge and network so that it can benefit homegrown curators of many generations to come? The plan said that a junior local curator will be hired for this project. But is that enough? Hong Kong has paid him a sweet package. Make the most of him.

And likewise, if Hong Kong artists wanting to work overseas, they would want to be welcomed by the local communities. Imagine if New York and London are treating Hong Kong talents like that? I just don't think this will happen because they aren't insecure about themselves, and they always welcome new ideas. Hong Kong needs to adjust its mentality to make this city welcoming to talents from around the world. Such narrow-mindedness just turns Hong Kong into "Asia's world village".

The row over Hong Kong's representation at Venice Biennale is one of the many examples illustrating local people's distrust in the authorities, just like the debate over national education curriculum, the land use zoning, property hegemony and many other issues. But since this concerns artists, whose job is to challenge the status quo, it becomes a debate erupted into fury and anger so much quicker and in a much greater intensity.

What's the solution? I honestly don't know. But I would imagine that only a governing system that is fully endorsed by the people can give us hope.

On the artist selection process, I'm no expert. But I have looked up on how things were done in some "culturally advanced" countries:

The US has chosen artist Sarah Sze for the Venice Biennale. The choice was endorsed by the State Department's Bureau of Educational and Cultural Affairs under the proposal of Holly Block, director of the Bronx Museum of the Arts, which serves as the commissioning institution, and Carey Lovelace, a critic and an independent curator. Block and Lovelace will be organising the exhibition together.

Simryn Gill was chosen to represent Australia. The news was announced by the Australia Council for the Arts and the Australian pavilion will be curated by Catherine de Zegher. The selection was made by a six-member peer panel:
Simon Mordant, Australian Commissioner for the Venice Biennale

[Special thanks to Joyce Lau for rescuing this copy]