That September: The Spiritual Awakening of HK 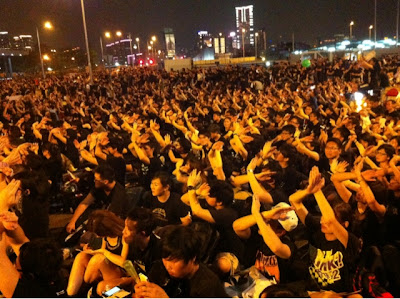 The Mayan calendar ends on December 21, 2012. Some interpret that as the doomsday. Others believe that it stands for a new beginning of human civilisation, characterised by an inner awakening of our spiritual needs. Together with the constant tension - chaos or even revolution, as signified by various occasions of Uranus-square-Pluto in these couple of years, 2012 is a critical year from an astrological perspective.

I'm no oracle. I'm no psychic either (otherwise I would've had a career shift long time ago). But I can't help thinking if these somewhat superstitious myths might not be entirely groundless.

I'm not a huge fan of taking the streets, partly because I felt that I didn't have to do that - I believe the power of the media and I felt that I always use my writing to make a difference. And I have succeeded in the past.

But this September, I felt that my writing could not do the magic any more.

Like tens of thousands of Hongkongers, I was down at the Tamar central government office to join the rally against the implementation of national education curriculum virtually every night after work, chanting slogans to vent my anger against the government while conducting live reporting at the scene via social media platforms.

The site was in incredible order. We did not need the police to maintain the order at the site. We didn't need a bin or a cleaner because people brought their rubbish home. No one pushed anyone. Everything was so peaceful and yet full of fury. At one moment looking at the crowd dressed in black tees, my tear dropped. This was my Hong Kong, my home - a civilised society yearning for liberty and justice.

The fact that tens of thousands of Hongkongers willingly dropped whatever they were doing and came out to protest night after night for over a week was unprecedented. What was more important was that a protest organised by a bunch of teens under the banner of Scholarism has drawn so much support without being hijacked by politicians. Some of them might turn up for publicity but no political party was directly involved in the organisation. There were no so-called political stars waving the flag to recruit people to join - in fact we went to show our support voluntarily. Most of those who attended the protest were adults or students who were old enough to be spare from sitting through the curriculum. But we were in fear for our future, how scrapping history lessons and introducing the potentially Chinese communist style of "national education" might brianwash our future generation, to blindly side with a political party instead of loving the society they belong to. Having emotions looking at the national flag, only singing praises but not pointing out the truth, are certainly not love. For instance, your father is a smoker. You tell him that smoking is unhealthy and that he should quit. Your father certainly doesn't like to hear what you are telling him to do, but you are telling him the truth out of nothing malicious but your love for him. But if you follow the Chinese communist mode, you would be telling your father that smoking is healthy and watch him die.

What the government did was crossing an important line, potentially crushing the city's core values of freedom, democracy and the rule of law, which distinguish the civilised Hong Kong from mainland China. This was a serious crisis threatening Hongkongers. It was the moment that I felt that if I did not join the protest, everything would've been too late.

"Without our core values, we can't possibly live in Hong Kong. We won't be able to make a decent living, because we are afraid that Hong Kong will soon be taken over by the corrupted style of business dealings often experienced in China, " said a friend who works for himself.

"It is this freedom that keeps me in Hong Kong," said a friend, a returning overseas Hongkonger.

At crisis like this, Hongkongers can often put down their greediness for money and ready to strike for a greater good. There is always something more important than money, and Hongkongers are becoming more more aware of that. Perhaps, thanks to the government's wrong doings in the past 15 years of handover, we have learnt how unjust our society has become, and we are merely peasants farming the crops for those economic feudal lords charging us exorbitant high rents.

Now that the government has sort of backed down, with chief executive CY Leung scrapping the three-year deadline and promising not to implement the curriculum as an individual subject during his five-year term; the committee looking over national education development cannot agree on the guidelines, it appears that this movement has made a big achievement - at least delaying it.

Whether there will really be a doomsday on December 21, 2012, we still have to wait and see. But what is certain for now is that this anti-national education curriculum movement stands for a spiritual awakening for Hongkongers, who have finally waken up with a unique Hong Kong identity from over a century of colonial rule and the 15 years after the handover.

City identities, as illustrated in the Liverpool Biennial's City States section, which I visited just couple of weeks ago, are the future due to the fast moving urbanisation around the world and people being increasing drawn to the urban life. A stagnant, singular national identity will no longer be in fashion.

Though the movement is temporarily over, there are more potentially evil initiatives betraying our interests to come. We need to keep fighting to guard our city. 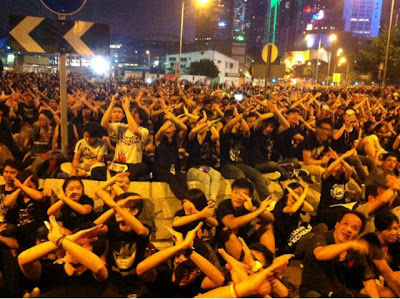