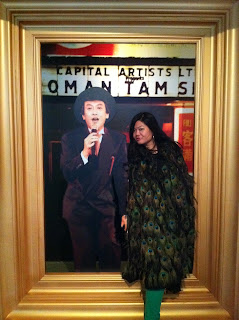 
Roman Tam and Jenny Tseng duet live Who's the Champion from 1987:

Roman Tam and Anita Mui duet live Within the Laser 1994 (too bad they are no longer with us):

One Saturday afternoon, the four of us went to check out the Pablo Picasso exhibition at Shatin's Heritage Museum. The exhibition, featuring 52 works of art by the Spanish modern master from Paris' Musee National Picasso, has already toured Taiwan and mainland China, and finally it landed Hong Kong about a month ago.

The blockbuster highlight for the 20th Le French May has been grabbing newspaper headlines here. I have reported about the exhibition quite a few times in the South China Morning Post, so I'm not detailing the content of the show. But there were some strange discoveries at the exhibition that I'd like to share.

Upon arrival, I realised how lucky we were to have arranged a docent tour, otherwise it would've been impossible to see anything. It was jam-packed like Mongkok. No! It was worse! People were literally everywhere, rubbing shoulders against each other at that tiny exhibition hall. Had we not have a docent leading us through the crowd, we could've seen absolutely nothing except the blurry and fragmented images of human faces surrounding us. But it seemed that all of a sudden, I realised how cubism worked! And if Picasso were present in this exhibition hall, I could totally understand how this maniac could be turned into his cubism inspirations. But I'm not sure how the blend faces of skinny “Kong boys and Kong girls” would inspire him to paint something as colourful as his imagination of his first wife, ballerina Olga.

While I was totally mesmerised by the sweet French docent Soline who patiently introduced us to the works in her charming French accent, it suddenly dawned on me that we were surrounded by a big group of followers – those who also wanted a docent tour but apparently did not or could not arrange one.

At first I didn't mind being tailed at all, after all everyone has the right to knowledge and I wouldn't mind sharing. But things didn't seem to go right after a while – we were elbowed out of our way by these free riders, got pushed to the back while we were supposed to be the authentic members of this docent tour that we specially arranged.

A couple of mid-aged women kept standing in front of us as if they were the front row guests of a fashion show. They weren't Anna Wintour for Christ's sake! My friends and I had to hold on to each other in order not to get lost in the crowd.

Just why Hong Kong people have such an appalling manner at museum??? I suppose docent tours are very common in museums everywhere. But when I would never ever squeeze myself into a group that I did not belong to. It's simply impolite! It's like, I only go to a party I have RSVPed. Gate-crashing is not my style.

But apparently that did not occur to be problem to that particular crowd at the Hong Kong Picasso exhibition. Some even went further to raise questions to the docent. I glared at the mid-age woman, and then turned back to the docent. She was put in this awkward position of not knowing whether to answer questions from the people who weren't really her responsibility.

Nevertheless, the French docent was polite enough to take the questions. But that immediate showed the gap between the cultured French and the barbaric Hongkongers. It was utterly embarrassing. I wonder what the French docent would think or tell her friends when she returns to France!

WHY?? Judging from the no nonsense questions raised, these intruders appeared to be educated, but how come their manner was of no match with their education level? Are Chinese people born to be barbaric and better suited to be farmers? Is that in our DNA? And for the first time ever, I sympathised with what Donald Tsang did – he had every reason to order the museum staff to open earlier just for himself, so that he could enjoy the exhibition in private, without having to deal with such a moronic crowd like we did.

But then didn't it mirror the behaviour of the exhibition spectators? Just like their leader now nicknamed as “Cheap Tsang”, who milked five-star hotel accommodation, free rides on private jets and free Michelin three-star meals out of his “friends”, the people he governs are freeloaders just like Cheap Tsang himself!

Finally we reached the famed portraits of Dora Maar and Marie-Therese Walter, the two lovers that Picasso had at the same time. Docent told us that judging from the colours and the presentation of the portraits, Picasso was said to have contrasting feelings for the two women of completely opposite characters – Maar obviously had a strong personality that Picasso might have found her difficult to deal with, but at the same time attractive; Walter, on the other hand, gave Picasso a warm and calm feeling that a man would need for shelter. Together with the jealous ballerina Olga, Picasso was probably just like casino mogul Stanley Ho, who has four wives [one deceased]. But the difference between them is that, Picasso did not have the mind of a businessman, who is good at assessing risks and finding the best and most profitable return in any investment. But then if Picasso shared the mind of Ho's, Picasso might have had “manageable” lovers and he wouldn't have left the world with these great paintings in which the artist had to use as a tool to release his complicated emotions.

Finally we made it to the end of the docent tour. Our group gave a round of applause to the sweet French docent who still managed to give us an informative guided tour to the exhibition despite the crowd.

But those free riders simply vanished the second when the tour ended – NO ONE said a thank you to Soline, not even those who raised questions annoyingly during the tour. It was a relief that the nightmare was over, but the whole experience was embarrassing – just why are Chinese people so impolite and ill-mannered despite they were educated? Culture has never been on such a high national agenda in China [and Hong Kong], which vowed to cultivate cultural and creative industries to strengthen the country's soft power blah blah. But just how is this possible when the quality of citizens are so low? Before learning how to run, they should start from crawling – launch a nationwide courtesy campaign first before talking about taking the world with cultural soft power!

To express our gratitude, we took the French docent to the museum cafe at the ground floor for some snacks. But my God! That was another high point of embarrassment! The thing [sorry it did not deserve to be called a restaurant or cafe] was worse than any of the Cha Chaan Tang I've ever been to in my life – the seating arrangements were confusing, the menu was extremely limited, the coffee was disgusting, no toasted sandwiches were served, and what was more, the dining area was very close to the corridor leading to the kitchen and toilet, and it was super filthy there! Just have you ever visited a museum [I'm talking about museums in Europe and New York] equipped with such a poorly managed cafe? Museum cafes are supposed to be great hang out spots, but there, that one at Heritage Museum in Shatin...I so wanted to dig a hole in the ground and hide myself there. And God knows what kind of impression that gives the French girl!

We wanted to head back to the Picasso exhibition but we gave up seeing the long queue waiting to get in. So we moved one floor up to check out the Roman Tam retrospective.

Surprisingly, the Roman Tam exhibition was so much more creatively curated than the Picasso exhibition. Perhaps with Picasso, there were these standard arrangements set by the Picasso museum in Paris. But with Roman Tam, the curating team must have been given a free hand to put together the show creatively.

Upon the entrance was the grand title in shiny gold colour – a great respectable colour that perfectly suited the late Tam's stage glamour. The exhibition told the life story of Tam in details, from his early life as a new immigrant from mainland China, taking up odd jobs from working at a tailor shop to office assistant at a bank, to his rise to fame as one of the greatest singers of our times with his distinctive silvery voice characterised with strength and clearness and images considered as very avant-garde by the standard of the conservative Chinese society of Hong Kong. On display was his many awards – platinum and gold discs, best singer awards and tribute awards he earned over the years.

While I was indulging myself studying the exhibits, I heard familiar music ringing from afar – it was Maan Shui Ling Fung So [Who is the Champion], the theme song from one of those wuxia TV series classics back in the 80s. I couldn't help but tracing the source of the music and then, behind that exhibition wall, there was this gigantic screen showing all the footages from Tam's best days. OMG! I loved loved loved those old videos! They also demonstrated Tam's versatile vocal range – from the powerful wuxia genre to the sensual and glamorous Persian Cat. The unbeatable team of composer Joseph Koo and late lyrics master James Wong wrote a number of great songs for Tam, and many of them have now become the greatest cultural treasure of Hong Kong. In fact, I have wondered if Bjork has ever listened to the wuxia genre songs composed by Koo, because some of the musical arrangements in Bjork's songs strike a chord with those Canto-pop classics by Koo.

Just as I thought I had already experienced the greatest climax of the exhibition, I turned around and
discovered something even better – the costumes! Another OMG here. I couldn't letting out a mild “wah” upon seeing those extravagant outfits that I've been dying to wear! The classic cape of peacock feather, the glittering sequined cape in blinding gold, the awesome shades Tam wore in the MV of Within the Laser! Suddenly I realised perhaps my love for glamour was all inspired by Tam's performances I saw when I was a child!

And the best, and most fun of all, was that replicas of some of the costumes were made available for spectators to try them on and take pictures with the cardboard Tam! A round of applause for the LCSD team who really put thoughts into curating the exhibition – and I could feel the team's affection for Tam. Seriously it was even more fun than the Harry Potter exhibition I saw in Sydney! And of course I wouldn't miss the chance of getting glammed up and posing as a Canto-pop star, even just for a photo.

Picasso was undeniably one of the greatest artists who changed the course of Western art history, and it was important for this kind of world class museum show to be staged in Hong Kong, so that general public who don't get the chance to travel can learn about the world's great art from museum exhibitions, not art fairs. But it was Tam's classics that will always stay close to my heart. At the end of the day, I'm a Hongkonger, and Hong Kong culture is where my roots are.