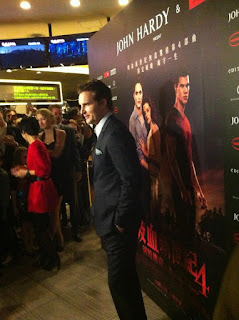 I know nothing about business, but it appears to me that "maximising profits" has become the golden rule of running a business. Whatever you are selling - food and beverage, newspapers, electricity and even movies, the greater the scope your business is, the more crucial it is to maximise the profits. The most commonly heard explanations from corporations range from guarding shareholders' interests or a surge in production costs. It doesn't matter if workers cannot have a share of the results from the hard work they have contributed over the past year in the form of pay rise or bonus. It does no harm to destroy the legacy built by the past generations either. Whatever you do, as long as the profits can be peaked, you seem to be on the right track. China Light & Power's unreasonable demand for charging more for electricity consumption despite earning a staggering profit is one example. And the other one that I can think of is the first part of the final installment of the Twilight Saga.

Here's my confession: I became obsessed with the painfully gorgeous and unrealistically romantic vampire Edward Cullen after I watched Twilight made its screen debut in 2008. Director Catherine Hardwicke gave her golden touch on Stephenie Meyer's vampire fantasy (which is essentially a piece of chick lit), turning it into a heart-wrenching romance that conquered millions of girls (and girls-at-heart) around the world. Hardwicke seemed to get everything right: the music of Debussy and Muse, the journey of how Bella and Edward found each other and how they survived the crisis in the ending made this seemingly ordinary romance extraordinary.

After watching the film, I finished all four Twilight books within just one week, fantasising one day, a bad-good boy would appear in my life and proclaim his never-ending love for this tired soul. It was a silly fantasy, but the idea really made my lackluster life more hopeful.

But after Hardwicke was dropped after the success of the first installment, Twilight Saga has lost its spirit. The subsequent installments Eclipse and New Moon were rather soulless. But just to keep watching for the sake of watching, like many other Twilight fans, I still made it to the final installment Breaking Dawn - Part I. But sitting through it was a pain in the arse.

I wasn't exaggerating. As a fan of the series, I should've been enjoying every moment of the movie as Bella and Edward have finally come to terms with each other, getting married, going for a romantic honeymoon and making babies - a dream ending that many girls would wish for their reality. But all the way through I kept checking emails and Facebook. There wasn't a slightest connection with romance. The simple plot was extended into a pointless drag. Even Edward didn't look good any more! I couldn't image what would happen to Part II.

Breaking Dawn was supposed to be the great tight ending for this series, but why dragging the story on for no reason and dividing it into two parts? In terms of literary achievements, Breaking Dawn is no where near Deathly Hallow in the Harry Potter series (for which I'm also a fan). The story is so much simpler and simply there isn't enough material to turn Breaking Dawn into a two-part film. But the worse was that Meyer also took up the producer title of Breaking Dawn, and here as the creator of the series, she has committed two HUGE mistakes: not only did she not guard her creation properly, she also took up the golden rule of "maximising profits" by letting the studios to chop one complete story into two for the sake of doubling the box office earnings. If fans feel that they have been betrayed, it's their business. She has already pocketed the money.

I always believe that an author should be ethical. Betraying your creation and those who love what you have created for the nothing but cash is sinful. I don't know exactly what the deal was, but based on what I observed, Meyer was no difference from China Light & Power or any other listed companies - they all shamelessly maximise their profits.

Fortunately, mega star Tom Cruise hasn't downgraded himself to that level. As the fourth installment of the Mission Impossible series, profit calculation of course is important to Ghost Protocol, but at least Cruise did not let down those who paid to see the movie. At least it was one fine action thriller with some very stunning action choreography sequences. And Cruise did not betray himself or anyone by performing his own stunts, swinging from some 100th floors of Burj Khalifa.
ENDS
Email Post
Labels: *HOME Crazy Film World