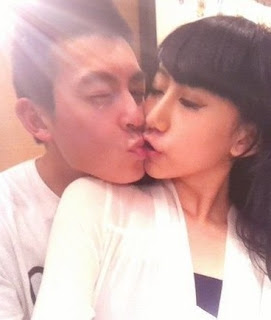 Men just never learn, especially if they have completely surrendered themselves to their penises.

Just when I thought I have left behind the horrid memories of puking in the office toilet after an overdose of hundreds of Edison Chen's infamous sex photos when the scandal broke in the beginning of 2008, I can't believe the deja vu is here so soon: Chen is back in the limelight, so as his photos.

This time the pictures feature a 16-year-old girl called Cammi, just another previously unknown langmo or pseudo-model, and they aren't as gross as compared to the ones I had to "study" in the office back then: just some smiley and (bad) kissing pics. No action, no nudity (you might be disappointed). But there were screen caps of Whatsapp messages exchanged between him and the girl. Thank God I don't have to see Edison's dick this time. But as they first graced the cover of this week's East Week magazine, I began to wonder, are men really that stupid?

Chen, now 31, was embroidered in the sex photo scandal that shocked the world's Chinese speaking communities (and some nosy Westerners I believe) when hundreds of photos were leaked on the Internet. I don't want to repeat the names of the female celebrities who were featured in those pictures any more, as the incident did enough damage to them, career-wise and emotionally. The incident also cost Chen's career, of course, who later came out to make a public apology and stated his indefinite hibernation in Hong Kong's brutal showbiz.

He's making a come back this year, launching a record that I have never listened to, and actively promoting his clothing business. Things are looking up, and his image has begun to improve until now.

Cammi was suspected to have leaked the photos to the media, but I don't know the truth, and I don't want to make any speculation. She's a 16-year-old desperate for fame. What do you expect?

But Chen, a fully grown up man, apparently has never learnt his lesson. He already has a terrible track record, just why he has to take those photos again?

Many people have done it in private, but those are just people. Edison Chen is Edison Chen. He's name is out there, and he doesn't have a good reputation. God knows how many people out there have been waiting for the chance to bring him down again, or take advantage of him. And he, stupidly, never learnt to protect himself and the people who love him, by not taking these stupid pictures, or at least, keep them in safe places. And more importantly, keep himself out of trouble.

Few months ago when I interviewed Chen's boss, entertainment tycoon Peter Lam Kin-ngok, I inevitably mentioned Chen's sex-photo scandal and his other young artistes who did wrong. He first frowned, and then he said he always educated his young artists to behave because they were the role models for young generation. He was certainly disappointed, but I believe he genuinely wanted to give them a second chance. And now, with these new photos and Chen's stupidity, I wonder what Lam is thinking at the moment. Perhaps he's utterly disappointed.

And now the big question is, did Chen have sex with the girl? And if they did, was the act carried out before or after the girl turned 16?

I hope he didn't do anything more stupid than taking those photos.