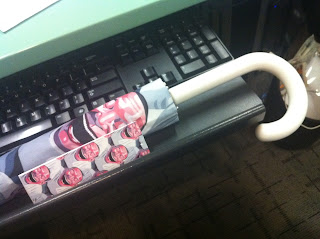 First day returning to the office after a three-week break which I wished it would never end, a long and skinny object in a familiar image is spotted leaning against my messy desk. It turns out to be a "Yue Minjun umbrella" - the whole umbrella featuring the images of the star-artist's iconic smiling self-portraits.

It turns out that this umbrella was created a while ago, some time in August when Harbour City announced that it has teamed up with the artist to launch this umbrella in limited edition. I don't know why it has taken so long for the umbrella to arrive at my desk but anyway, no one should complain about having a nice umbrella delivered.

The umbrella, I must say, was quite nicely done. It is wrapped with a cover featuring the pink-ish absurd smiling faces jammed together. The actual umbrella features the the characters crouching and smiling against the white backdrop. It's...well...kinda cool.

In fact, I was a little surprised by the delayed appearance of the commodification of contemporary Chinese art in Hong Kong, especially when the contemporary Chinese art market has become so hot that record sales have been achieved at auctions in Hong Kong one after another. I thought the images of those signature paintings by star-artists like Yue or Zeng Fanzhi or Liu Ye (my recent favourite) would've made it to the shelves of gift shops years ago. There have been some shitty ones here and there, but I only saw some decent ones the first time during my September's visit to Ullens Center for Contemorary Art at Beijing's 798 arts district - a silk scarf featuring the image of Zeng's latest painting, commanding mroe than 1,000 yuan. There was also a series of stationery designed in Zeng's name. And finally here's a Yue Minjun umbrella at my desk.


Personally I have no problem with the commodification of art, as long as it is done in a cool way. MoMA does it by turning its paintings collection into postcards, posters, magnets or other small gift items. The Japanese contemporary artists have always been on the frontier. Yayoi Kusama has a wide range of products featuring her own images, signature polka dots and the iconic pumkin. There's a range of Yoshimoto Nara products from posters to books, T-shirts and even clocks and ashtrays available at Tokyo's Mori Art Museum shop. And of course, there's Takeshi Murakami, whose SuperFlat images already made it to the high fashion world through his collaboration with French fashion house Louis Vuitton. And the common denominator I found among these commercialised art products is that - they look cool and stylish and most importantly, they don't look cheap: They are great art being turned into impeccably cool designs, not some pirated shit saturated in most parts of China.

I suppose it's still early for Chinese artists to commercialise their works, but it's never too late. And perhaps Hong Kong can become a hub for that (since Hong Kong likes to be a hub for everything). It's such a good way to publicise an artist and his works, as well as the image of one city (or country). They simply serve as great souvenir for tourists. If the images of Yue's paintings can be spinned off into such a cool umbrella, I'm sure there are plenty of other ideas waiting to be executed. Look at G.O.D. and how some designers turned King of Kowloon's graffiti into commodities! This is Hong Kong's edge.

And will I carry this Yue Minjun umbrella around in the rain? Most definitely. It's too cool to let it idle in the dry land. But how is this umbrella boosting public's understanding of contemporary Chinese art and Yue's paintings? I really have no clue. Perhaps no one does and no one cares.
ENDS
Email Post
Labels: *HOME #Culture Crazy Art World