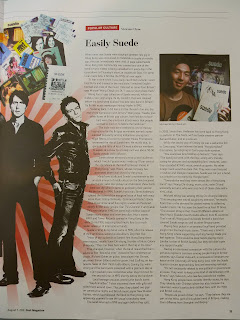 This time there will be no need to sneak out of school to tail the band at the airport or hotel lobby. It will not be necessary to bring along the collectibles to get autographs from the band.
Been there done that. My passion for the band was the key to open a door leading me to a brand new world.

My collection ranged from music CDs to fanzines and even music magazines all written in a language that read so alien to me. To learn more about the band and communicate with their fans in England, I forced myself to learn to write in their language and speak their language in their strange accent from BBC. When there were words in the lyrics or magazine articles that I didn't know, I looked them all up in dictionary. I even took notes of those unpronounceable words and indecipherable phrases and asked my English language teacher at school. As time went by I learnt about more than just the band - I got to know a bit of the culture of the previous coloniser, just in time before the handover. I didn't have the chance to visit the country at the time, but at least I felt that there was some chemistry between us. It's part of the past that I will never want to forget.

But who would've known that years later I had the chances to interview and write about the band, and even make a living out of it. I'm fortunate. Sometimes I wonder what could've happened if I didn't fall for the band?
Parents should be glad if their children have fallen for a musical act. After all they might be up to something much worse. But of course, if they are into something that's not so tasteful, parents should assume the responsibility to advise their children.
Enjoy the show tonight!
Email Post
Labels: *HOME Blog'suuuuuuuup??