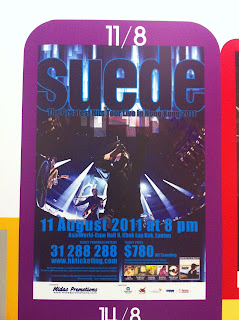 On the night of August 11, 2011, the clock inside Hall 8 of Asia-World Expo was turned back to 14 years ago when Simon Gilbert's foot hit the bass drum, leading into the intro of She off Suede's platinum selling third studio album Coming Up. The very same song opened the band's second Hong Kong gig in 1997 shortly before the handover. It was the best of times - music was at its best, Hong Kong was still at its best.

But on the very same night outside of AWE, three reporters were arrested for alleged "Attempted Burglary" after they "broke into" the new chief executive office while on duty visiting the new government headquarters in Tamar when on the job, despite the press badges they had around their necks. This is the present, the shocking, shameful reality of Hong Kong 14 years after the handover. Not only that democracy is beyond attainable, but also our freedom of speech and the rule of law - the core values that laid the foundation for the city's success - are under unprecedented threat.

The crowd inside AWE was apparently not aware of that at the time. Following She there were Trash and Filmstar. The overwhelmed crowd was officially taken back to the 90s, indulging themselves in their sweet teenage memories. Time stood still. Grown-ups in boring suits swaying, office ladies in heels screaming, everyone knew every song by heart and sang along with Brett Anderson through out the night. Anderson was still in top form. The defects of his in-ear monitors seemed to have little effects on his performance. He was still the very same Anderson from my memories, still hyper on stage bouncing all over the place, shaking his hips to the beats and, of course, his signature move of toying around his wired microphone. 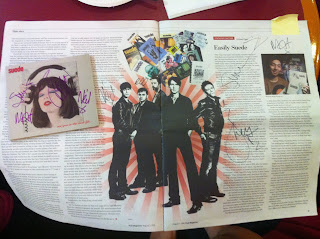 The clock was turned back even further when the band delivered classics from the band's eponymous debut like Animal Nitrate and To the Birds. Titles from Dog Man Star (an album which I dare to say is many Hong Kong fans' favourite) took over the show one after another. Anderson was in top form almost exactly like the way he was in 1997. Bassist Mat Osman was obviously enjoying every moment of it. Guitarist Richard Oakes and keyboardist Neil Codling were striving to deliver their best performance like the old days. When fans bellowed "Oh...if you stay..." along Anderson in The Wild Ones, they meant it. They wanted the band to stay and more importantly, time to stay. And the beautiful ones refused to be dismissed even after shaking their bits to the very last song Saturday Night. They hang in there, clapping, shouting, hoping for miracles to happen. No one, seriously NO ONE wanted to leave the the only time frozen zone of Hong Kong.

The clock inside AWE might have stopped for the duration of 18 songs, but the clock outside did not. By the time the crowd at AWE finally disbanded, the three reporters were detained in police station till very late at night for a crime they did not commit. Ming Pao, the newspaper for which one of the reporters work, issued a statement at mid-night defending its reporter and condemning the way the police handling this case.

It is not something anyone would want to see but soon one day the pictures portrayed in We Are the Pigs  and Killing of A Flashboy might reflect on riots taking place not just in London. But if that will ever happen, there will more than just police arming themselves with shields and pepper spray, but tanks running along Gloucester Road. If whoever is in charge has any sense, they should stop pushing people to the extreme.

We are more than just litter by the sea.

Trash/ Filmstar - How come the first three songs are in the same order as the gig from 1997? Was my memory really that good or was it merely my hallucination?

Animal Nitrate - Awesome! One of my favourites from their first album!

To The Birds - This was a surprise. Though from the setlists of their previous gigs in their Asia leg tour, this song had been there, but I never expected that I would hear them playing this song live again (Well I never expected a reunion gig anyway). An excellent and totally underrated Suede early classics, but the crowd wasn't as excited. Perhaps some of them weren't that familiar with the early b-sides.

By The Sea - Not a personal favourite, but the crowd obviously loved it. If putting all the Suede ballads head to head against each other, The 2 Of Us would've beaten all other contestants.

We Are the Pigs/ Killing of A Flashboy - Surprise surprise! Two of my personal favourites. A perfect combination reflecting on London riots. The crowd went wild with We Are the Pigs. My heart ached hearing thousands of people singing "We'll watch them burn".

Can't Get Enough/ Everything Will Flow - I never got myself around to love Head Music. Maybe it's because of the ugly cover. But hearing these two tracks live on stage kind of changed my perception of their fourth studio album. There were some great tunes in it!

So Young/ Metal Mickey - LOVE LOVE LOVE these two tracks! Classic Suede. Many may favour Coming Up for its pop and catchiness, but those from their debut album have a much stronger character thanks to Bernard Butler's ambitious guitar arrangements. Too bad the band didn't play Moving. [People started to light up their ciggies at this point for some reason]

The Wild Ones/ New Generation - Another great sing along session. But Dog Man Star is the kind of album that should be played from the beginning till the end as one complete piece of work.

The Beautiful Ones - The best moment of the night. Everyone could sing along without missing one single note. The band must have been really touched. I was only trying to hold my tears back.

She's In Fashion - Not bad. But the band could've given us something better in their encore session.

Saturday Night - Now THIS was the last song of their 1997 Coming Up gig in Hong Kong (If I remember correctly) and then it also closed the curtain of their night in 2011. It was definitely Coming Up deja vu, a nice closure to the fabulous Suede reunion night.

Missing pieces: The Asphalt World, The 2 Of Us, Moving, The Drowners [This was the "greatest hits" gig. How could they not perform their first single?], My Insatiable One, Europe Is Our Playground