It's not the high heels. It's the high rent. 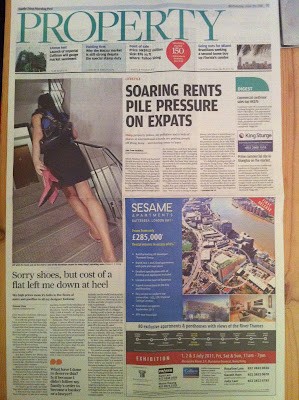 In today's Property Post, South China Morning Post, I wrote about how I had to leave my high heels in my shoe boxes because I cannot afford a flat with a lift and had to move to a five-floor walk-up (Sorry shoes, but cost of a flat left me down at heel). The occasional first person account was supposed to be a funny one, taking a piss of myself and Hong Kong's property market, where rent has been driven to an insane level regardless of the location - prices have become unattainable even for those who have a decent job.

Thank you for those who liked the piece and the encouraging comments. But not everyone got it right. One reader wrote in saying that the piece was "embarrassing", and that I "came across as a spoiled brat".

I thanked that reader for taking the time to read my article and writing in. Spoiled brat or not, only I myself have the right to judge. And that's not even the point - the shoes were just a joke dressing up the sad reality: Hongkongers cannot live a life they deserve because they are forced to pay an exorbitant amount, a large enough portion of their salaries just for a shelter.

This explains why so many people have to live in horrible conditions - remember the outbreak of the fire at an old building in Ma Tau Wai Road just few weeks ago? The fatal blaze claimed four lives - a pregnant woman, two young children and an 18-year-old girl, who turned out to be a participant of Young Post's young reporter programme. The victims were squashed in a walk-up building, where flats, apparently tiny enough, were divided into small rooms. It's not uncommon for poor families of more than four people having to stuck in a room of just 100 sq ft. They could've escaped if the building wasn't over populated with all the fire exits and stairwells blocked. Do they not deserve a decent living environment?

Hong Kong's housing condition has gone from bad to worse, with limited supply of public housing estate, suspension of House Ownership Scheme, and the abundance of over-priced "luxurious"re-developed from old buildings. Just walk down Queen's Road East, it's not hard to spot those over priced posh looking new residential buildings erected on sites where affordable homes were once located. Can the old residents forced out by property developers afford a flat in these new buildings by selling their old homes? No, because the prices were already jerked up by property developers.

Of course comparatively speaking, I'm fortunate - at least I have a roof and I am still fit enough to hike up five floor of stairs. And I'm not complaining. I wanted to point out the fact that people's salary cannot catch up with the rise in rent - rent at my old building (with lift) has been doubled in two years. If you make HK$20,000 to HK$30,000 a month, and you have no one else to share the living cost with, how can you afford that? Rent in Tseng Kwan O cost more than HK$10,000. If you only want to spend under HK$8,000 a month on rent, you can go to Shatin, Kowloon Bay, NT...or a walk-up in town, but only if you are lucky. But a bus/ ferry ride to outlying islands and remote NT costs around $30. $30 x 2 x 30 = $1,800. That's not much different from paying high rent living in city centre. And for a lot of reasons, such as long working hours, attending evening classes, etc, many have to live in convenient locations to avoid commuting. Driving in HK is a luxury for God's sake! 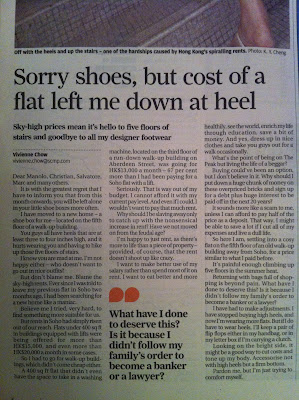 I would never get that kind of pay rise unless I get another job - a non-journalism job. Does it mean that I have to give up what I love doing the most for $$$$$? And for what? To pay rent to these feudal lords of our times? If so, then stop telling kids to live their dreams because they do not deserve one - their only path is to get a job to pay rent!