Han Han - the hottest name in today's China's literary scene; the young and fearless blogger who dares to publicise what's on his mind in a world where freedom of speech virtually doesn't exist; a professional rally driver who has won the championship title in 2007's China Circuit Championship; an extremely good looking 28-year-old who failed in seven subjects in high school and never attended university as a result.
Finally I got hold of Han Han's Youth, a collection of his blog posts/ articles/ essays published by a Taiwanese publisher. Everyone's been talking about Han Han, but I never got around to sit down and read his stuff until very recently. His background, eloquent and yet mean writing remind me of this: "Be famous while you are still young." 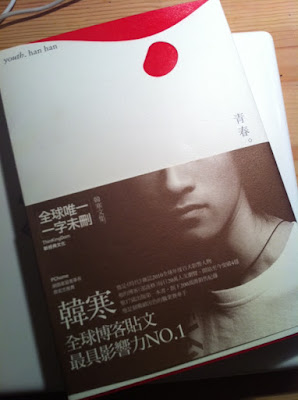 Those are the words of wisdom from the great Chinese author Eileen Chang. Indeed, why should one wait till he's old to become famous? If your success comes late, you don't have much time to be around to enjoy the fame (and fortune) you have earned. It's a formula so simple and easy to grasp, but how many of us manage to make that happen?
Come to think of it, I Google-ed "famous college drop-outs", and apparently most of the world's most famous figures have never received or completed their university education: Mark Zackerberg, Bill Gates, Steve Jobs, Li Ka-shing, Lady Gaga, Madonna, Anita Mui, Faye Wong...the list is so long that it's impossible to finish.
But then it suddenly dawns on me: what's a degree for?
Honestly, other than degrees that offer professional training and qualification such as medicine, law, accounting, engineering and architecture, a university degree doesn't mean much. If you got a degree in singing or voice training, does it mean that you will become a great singer? Or a degree in literature or creative writing, does it automatically make make you become a best-selling author? What about a degree in journalism? Seriously, a degree in journalism, regardless of where you get it from, is not going to make you a good journalist -- the best journalists/ writers with whom I've worked didn't attend university at all.
Friends who have been interviewing kids for jobs have told me that they have stopped looking at people's university degree, but instead which secondary school/ high school they went to, because that piece of information simply tells you a lot more about the candidate. One's teenage years are the most important phase as the education and experience one encounters during their teenage years will create a much bigger impact on his life. You have already become what you are when you finish secondary school, and whatever you do in university doesn't mean much. One very simple example: in most cases if you went to a mediocre secondary school graduating with mediocre results, it doesn't mean much even if you major English at university. Your English will still be shit regardless.
If I could turn the clock back, starting my journalism career right after I graduated from secondary school, investing the three-year university tuition fees (HK$42,000@ x 3) into a fund or something, I could've still make it happen as a journalist with the training and real life working experience with the newspaper, while I would have saved enough for the deposit of an apartment, then making a purchase during the economic downturn. By now, I could've already become a landlord living on the rental income while still happily working as a journalist and a writer.
But then, there's NO if's or but's in life. A university degree is merely an intellectual orgasm for the mediocre ones who are too timid to take the risk in their lives, who are simply not talented enough to make a fab life of their own at a young age.
And a master degree? That's worse - you have a serious self-confidence issue and you have no other options but to obtain a higher degree in order to prove your ability. But it's too late now, as I have already fallen into the trap. So let's hope I'll be smarter next year when I graduate.
Email Post
Labels: *HOME Blog'suuuuuuuup?? Crazy HK