假如我是潘霜霜 If I were Pan Shuangshuang

[Please scroll down for English version] 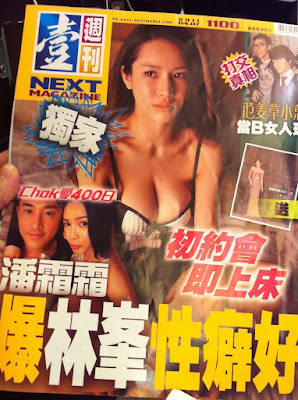 Few weeks ago, Pan Shuangshuang was still a nobody. But in just less than three weeks, the previously unknown mainland model has elevated from being a nobody to talk of the town – thanks to a string photos suggesting an intimate relationship between her and TVB heartthrob Raymond Lam Fung. The photos - some featuring her "sleeping" with Lam - “leaked” to the media have graced the covers of virtually all the magazines in town, and Pan is now famous (or infamous).


Everyone’s been questioning if Pan has had plastic surgeries or a boob job, or if she has sold her has-been affair in order to make herself famous. But put all of these aside, has anyone ever thought of this as a revenge on the guy who has never acknowledged such an affair that perhaps Pan once dedicated herself to?

If you have worked hard for something, of course you want to have something back. But then, in a relationship’s context, not every woman is looking for a filthy rich man to offer her a huge mansion with servants standing by for her to boss around, or a credit card with no credit limit.

A lot of women are willing to make an effort, but the point is to “do it together”: We are broke? Let’s save money together; The apartment is too small? Don’t worry, let’s shop less and arrange our place better together to maximise the space we have. Women are happy to share mortgages and expenses – only if the guy is the one she loves. And in return, all they want is just one very simple thing: to have his acknowledgement in this relationship.

No woman can stay forever invisible in a relationship. Even Carol Choo, who has been living the life of an invisible woman behind super star Andy Lau for more than 20 years, has finally earned the public acknowledgement that she deserves as Lau held her hand in public last year. Even if you are addressed as 2nd wife or 3rd wife, it is still a form of recognition – the guy has acknowledged the relationship publicly and this is a demonstration of his commitment to these women.

If “no strings attached” is what the guy is looking for, such as the so-called “Friends with Benefits”, then guys, pleeeeeeeeeeeease, should be alert and not cross the line:
Do not sleep over – please go home no matter how exhausted you are, even if you have to crawl back home.
Do not share too much information of what’s going on in your life, particularly something really sad or happy – because that will give the other person an impression that you trust her a lot and she’s not more than just a FwB.
Do not buy the other person any presents, no matter how small and frivolous they are – because the girl might think that you had her on your mind.
Do not show off your sense of humour and say humorous things that make the other person laugh out loud happily – because that will make the girl fall for you.
Do not act too comfortable around the other person – any actions like farting and burping loudly should only be done when you are around your family and your loved one, because they accept you for being who you are, and performing actions like that could suggest that you consider her more than just a FwB.
And one more thing, please stop getting in touch three weeks after you started the affair – Make up your mind as soon as possible and just let her go if you are not interested.

Then of course, both man and woman are responsible. So girls, you should just vanish on the guy in no more than seven days. Learn from Samantha Jones in Sex and the City: if you are done, you are done. NEXT! There is no such thing as FwB - friends do not give each other "benefits", as such "benefits" are out of the realm of the definition of friends!

However, breaking the rules is our forte. And when the line has been crossed, it'll be too late.

I’m sorry that I do not have any insider info on the ordeal between Pan and Lam. But one thing for sure is that there’s a significant discrepancy between the expectations from both parties in this relationship/ non-relationship.

Fortunately, Shuangshuang was smart enough to scheme and load up her guns beforehand, otherwise no action could've been taken even if she dared to blow things up and crush everything between her and her ex-lover.
If I were Shuangshuang, I would probably be doing the same thing, as at least it is a kind of acknowledgement of the efforts that I put into this unrecognised relationship. Although at the end of the day, just like what Shuangshuang said to the media: "Both of us have been deeply hurt."

Unfortunately (or fortunately?), I am not as smart as Shuangshuang.