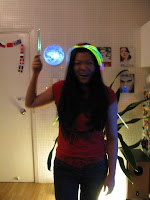 [Please scroll down for English]

Women who are not clever enough usually do not have a happy ending.

Few weeks ago I watched a TV current affairs programme called Sunday Report, in which a bunch of guys were interviewed. So these guys were bitching about women, what they liked, what they didn't like, etc. Basically, what they wanted was a woman who knew what they wanted, but at the same time knew when to shut up and let them "win". For small things like even changing a light bulb, women should praise for the men's "ability", for nothing but just to make them feel good.

So the truth is -- they want a woman who knows when to play dumb, even if they are just acting for the sake of it.

Most women are very smart. Other than the fact that we are REAL smart, one of the other reasons is that the Equal Opportunity Council made an important move in overthrowing a long-standing schooling system.

In the past, primary school boys and girls were separated into two different queues when getting their secondary school places allocated. But thanks to EOC, this system was abolished in the name of "equal opportunity". The result was that, boys and girls are now mixed together. Because girls are generally more mature than boys at a young age, girls tend to out do the boys in schools, and thus girls stand a higher chance to attend a better secondary school than boys. What's next? These girls will have better chance to attend a better university.

Hence, if you ask a girl if she's willing to go out with a boy who's studying at a university of a lower reputation, she will very likely to say no. A guy with no university degree? Forget it. It's not because these girls are snobs, it's just that they want to be with someone on a similar level, which is not too much to ask for.


But since supply outweighs the demand, girls are left with no choice but to work hard on their careers. Because of their cleverness, they successfully climb up the career ladder. And they are careful and ruthless, because one little mistake can cost them another promotion.
Unfortunately, career is not like relationships. When you are too smart, too curious, asking too many questions and refusing to compromise, there will only be a very unhappy ending.
Hence, the most clever women are those who know when to play dumb, and they must have the acting skill that's good enough to win them an Oscar -- especially when most men in Hong Kong are much dumber and weaker than us!

Perhaps the EOC has never thought of themselves being one of those contributing to the over abundance of single women in Hong Kong.
Let's learn how to be dumber. It's never too late. The goal? Just to have a happy ending like everyone else.

Unless you have given up men in Hong Kong from day one.
Email Post
Labels: *HOME Crazy HK Dating