Hong Kong must "collude with foreign forces" - and here's why 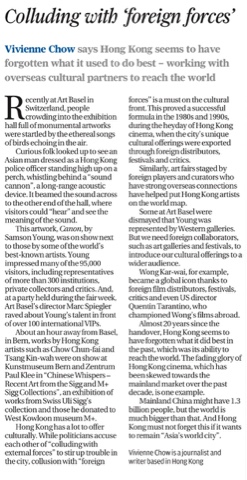 Recently at Art Basel in Switzerland, fair-goers crowding through the exhibition hall populated with monumental artworks were startled by the ethereal songs of birds that echoing in the air.
The curious ones looked up and were caught by the sight of an Asian man dressed as a Hong Kong police officer standing high up on an elevated perch, whistling behind a “sound cannon” - long range acoustic device. It beamed the sound across the other end of the hall, where visitors would be able to “hear” and see the meaning of the sound.
This was an artwork entitled Canon by Samson Young. The Hong Kong artist staged a sound performance for his work that addresses the issues of migration throughout the week-long art fair, and his works were on show next to those by some of the world’s biggest blue-chip artists ranging from Paul McCarthy to Anish Kapoor.
The artist impressed many of the 95,000 visitors, which included representatives of more than 300 museums and institutions, private collectors and art critics from around the world. His name was also highlighted at a BMW party held during the fair week, where Art Basel’s director Marc Spiegler raved Young’s artistic talent in front of over a hundred international - primarily Western - VIPs for he was chosen last year to take part in the BMW Art Journey, an art programme backed by the German luxury car manufacturer.
And about an hour away from Basel in Bern, works by Hong Kong artists such as Chow Chun-fai, Tsang Kin-wah and Adrian Wong were also on show among those by their mainland counterparts at Kunstmuseum Bern and Zentrum Paul Klee. They were part of the exhibition “Chinese Whispers – Recent Art from the Sigg and M+ Sigg Collections”, display of artworks from Swiss collector Uli Sigg’s collection and those he donated to West Kowloon museum M+.
It wasn’t the first time for Hong Kong artistic and cultural talents making an impression overseas. From Bruce Lee who first put Hong Kong cinema on the world map in the 1970s, to films by the likes of John Woo, Wong Kar-wai and Johnnie To Kei-fung that garnered global recognition from Hollywood and European film festivals in the 1980s and 1990s, Hong Kong has always have a lot to offer culturally besides money-making opportunities. The recent rise of the city as an art hub amid the vibrant art market, anticipation of West Kowloon Cultural District and the recent headline-grabbing political turmoil has sparked foreigners’ curiosity of local contemporary artists.
While politicians have been accusing each other of “colluding with external forces” to stir trouble in the city, collusion with foreign forces is a must for Hong Kong on the cultural front.
This was already proven a successful formula back in the 1980s and 90s. It was the golden era of Hong Kong cinema as well as television. The mainland Chinese market was non-existent and Hong Kong was a tiny market, but Hong Kong films, TV shows, Canto-pop and celebrities had a huge following in the region and the rest of the world. Foreign agencies and distributors were eager to play the part – though largely because they were bankable cultural products, they succeeded in helping to export the city’s unique cultural offerings abroad.
Similar formula is observed in the art scene, though it is operated on a completely different system. Art fairs staged by foreign players and curators who have strong foreign connections have helped put Hong Kong artists on the world map. Take Hong Kong’s participation in Venice Biennale since 2013, when the Arts Development Council decided to team up with M+ to present the city’s exhibition at the Arsenale. The growing foreign attention on artists Lee Kit and Tsang, who were presented, was most certainly not because of some Hong Kong government officials toasting at the opening ceremony.
At Art Basel, Young was presented by Galerie Gisela Capitain from Germany and team (gallery, inc.) from New York. Some were dismayed by the fact that the Hong Kong artist was shown by western galleries, instead of a local or an Asian gallery. While the Swiss fair’s selection of galleries might raise a few eyebrows, the reality is that there are yet that many Asian galleries that have the capacity - both in terms of finances and content – to afford exhibiting at the gigantic and highly expensive fair.
Those in the West who are not familiar with Hong Kong also prefer someone they know as a guide to the city’s cultural offerings. Wong Kar-wai became a cinema icon in the West not because of Hong Kong film companies but foreign film distributors, film festivals, critics and even American film director Quentin Tarantino, who championed for Wong’s films abroad.
Almost 20 years on since the handover, Hong Kong has grown to rely on the vast mainland Chinese market and the local political disturbance has created an inward looking attitude in the city. The city has forgotten what it did best in the past, which was the ability to reach the world. The fading glory of Hong Kong cinema, which has been skewered towards the mainland market over the past decade, is one great example. Hong Kong’s cultural sector cannot afford to repeat the same mistake.
Mainland China might have 1.3 billion of population, but the world is much bigger than that. And Hong Kong, if it wants to stay truly as “Asia’s world city”, must not forget this.
A shortened version was published in the South China Morning Post on July 1, 2016
Email Post