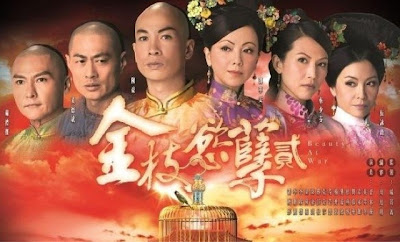 [Scroll down for English]


The unusually low ratings for TVB’s costume drama Beauty at War has been among the talking points in over the past couple of weeks. But against the mainstream view I decided to chase this TV series, which is rather unusual for me. I seldom watch TVB dramas, but I was drawn to this one not only because this is supposedly a sequel (or a part II, whatever you call it) of the hugely successful period drama series War and Beauty (2004) by producer Jonathan Chik and Chow Yuk-ming. This show touches upon one very important issue in modern day society: controlling public opinion.

As mentioned briefly in my previous blog post I don’t get it, the show, set in the Qing Dynasty’s Jiaqing period (1796 – 1820) evolving around the politics and scheming among the ladies trapped in palace Forbidden City, draws lukewarm response because the majority of TV audience (i.e. housewives) found it too complex to follow – people just don’t get it.

The prime-time show has achieved a low 19 rating points – an equivalent to slightly more than 1 million TV audiences as compared to the normal 30 rating points. Audiences blame the show for carrying too many intertwining subplots, the characters’ lack of charm, and they have to chase the subtitles as the lines are spoken in rather classical Chinese as compared to daily spoken Cantonese. There was even an online poll in Commercial Radio asking people to vote whether TVB should axe the series before it ends.

This was a stark contrast to War and Beauty, which earned acclaims from both critics and audiences when it was aired in 2004. Rounds of applause were given for the complex storyline evolving around the politics of the , resembling today’s office politics.

Nine years later, the duo came up with Beauty at War. But instead of being a story simply about scheming and political struggle among the princesses and servants, Beauty at War is more conceptual. One audience made a very good point in TVB forum: “This show evolves around creating rumours and spreading rumours, but what it really wants to address is the importance of controlling and directing public opinion.”

All the incidents in the show are driven by rumours, and they are concluded by other rumours. Rumours are circulated inside and outside of through an audience that are hungry for entertainment but never question their validity. And after a while, people will start believing these rumours, and even the most fabricated stories will eventually become real. Then different people holding different positions are taking advantages all the way through.

Isn’t it the same as today’s society?

Thus the focus is not about scheming and politics. As a media person, what I learn in this show is how people in charge must rely on public opinion to maintain its authorities over the public. Those who want to challenge the authorities also need the help from the media in order to put pressure on the authorities.
Thus the media gets tipped off from time to time. The government, politicians or ambitious businessmen like to get together with the media on a regular basis. They want to make friends with us? Don’t be so naïve. They only hope the media to help spreading a few nice words – the government can get more public support for policies, or businessmen can maximise their profits by creating a better image through the media. Politicians who want to sabotage some unfair public policies or the opposite camp also use the same method by tipping off the media about the dodgy secrets of their opponents.

Thus all these political debates that we see in the media are no difference from the kind of rumours being spread around in Beauty at War. Someone exposed the West Kowloon Cultural District's extreme over budget (as cost has gone up from HK$21.6 billion to a reportedly HK$47.6 billion) to the media to get the public to slam on the arts hub project. Art Basel Hong Kong is branded as a catalyst for arts and culture when in fact it is a massive trade fair dressed up as a cultural event. Paul McCarthy’s Complex Pile inflatable sculpture is a piece of shit because people have said so. As the rumour mill goes around, the majority of the audience with a mediocre intelligence are no different from the palace maids and eunuchs in Beauty at War – they will keep spreading the rumours around without asking any questions.

What I am afraid is that I am probably more or less the same as the maids and eunuchs who thought they were smart to volunteer for their masters to spread the rumours and manipulate people's minds. Such kind of work will get them no where, and certainly won’t bring them much luck.