One thing that I did not mention in my previous post about author-turned-activist Wong Yeung-tat's The New King of Kowloon was that, I felt that I was attending some sacred ceremony of a cult.

When friends and colleagues first told me about Wong's large loyal following, I didn't take their comments seriously until I set foot at Kowloon Bay's KITEC on Saturday night.

On its third floor where the stand-up comedy took place, a long queue made up of young local men and women was spotted. I didn't know what it was all about. But on a closer inspection, the queue led to the counter where a range of souvenirs were offered for sale. For someone like Wong, who first came to fame because of his authorship of scripts for TVB dramas and movies then books, followed by hosting internet shows, you would've thought if he were to sell souvenirs, he should've been selling things like books, DVDs of the recordings of his shows, or even items of People Power - one of Hong Kong's radical political coalitions with which Wong is affiliated. 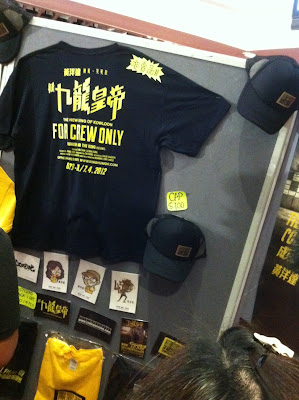 But no! They were all items for self-promotion: mugs, slogan tee shirts, various sorts of accessories, posters of Wong posing as if he were George Clooney, and [My God!] figurines of Wong himself!! Not even Andy Lau would've sold figurines of his image, despite being a super star blessed by such a gorgeous face! The most he did was selling this black-and-white furry combo known as XO!

I couldn't imagine anyone would've bought any of these but I was SO bloody wrong. There were tonnes of people lining up just to buy those items. And through out the show, his supporters were cheering for him, and during the break ladies properly dressed asked him for autograph. After the show, there was even an autograph session - so I guess to these people, Wong is like Andy Lau to his fans.

But it felt different from fans idolising their beloved stars. It was more like a cult, and Wong is their cult leader.

I wonder if this is the trick a Hong Kong politician in the making needs in order to win a seat in Legco. Fifteen years after the handover, Hong Kong's politics remains a failure. Hong Kong lacks a charismatic political figure who has this magic power to mobilise the mass. And if anyone possessing such a potential, one must seize the chance to elevate himself/ herself to the status of a cult leader, directing the ignorant masses to act on his/ her orders during the pursue of any political cause. Maybe this is the new gameplay in Hong Kong's political scene, for having the ability has been proved to be inadequate.

This reminds me of the fall of Bo Xilai. During one of the news conferences, premier Wen Jiabao clearly warned of the repeat of the disaster brought by Mao Zedong during Cultural Revolution between 1966 and 1976. The ignorant masses worshipped Mao like a God, and I recall that mum once told me that grandpa used to hug a figurine of Mao when he went to bed. Everyone was reading the red bible of Mao's wisdom, publicly demonised intellectuals for not following the party's ideology. And the result? Many were killed and prosecuted, and a large part of Chinese history and culture was destroyed [thank God many escaped to Hong Kong and brought those treasures with them]. Wen did not name the name of the disgraced former Chongqing chief during the news conference, but his comments were linked to his demise the day after that news conference.

Having said that, I don't think such kind of extreme will ever happen in Hong Kong. After all, I believe the majority of the population is either too aloof or too rational for this kind of political cult. Or perhaps people in Hong Kong are just too ignorant to care about political issues despite the freedom of this city is constantly under threat.
Email Post
Labels: *HOME #Culture Crazy HK